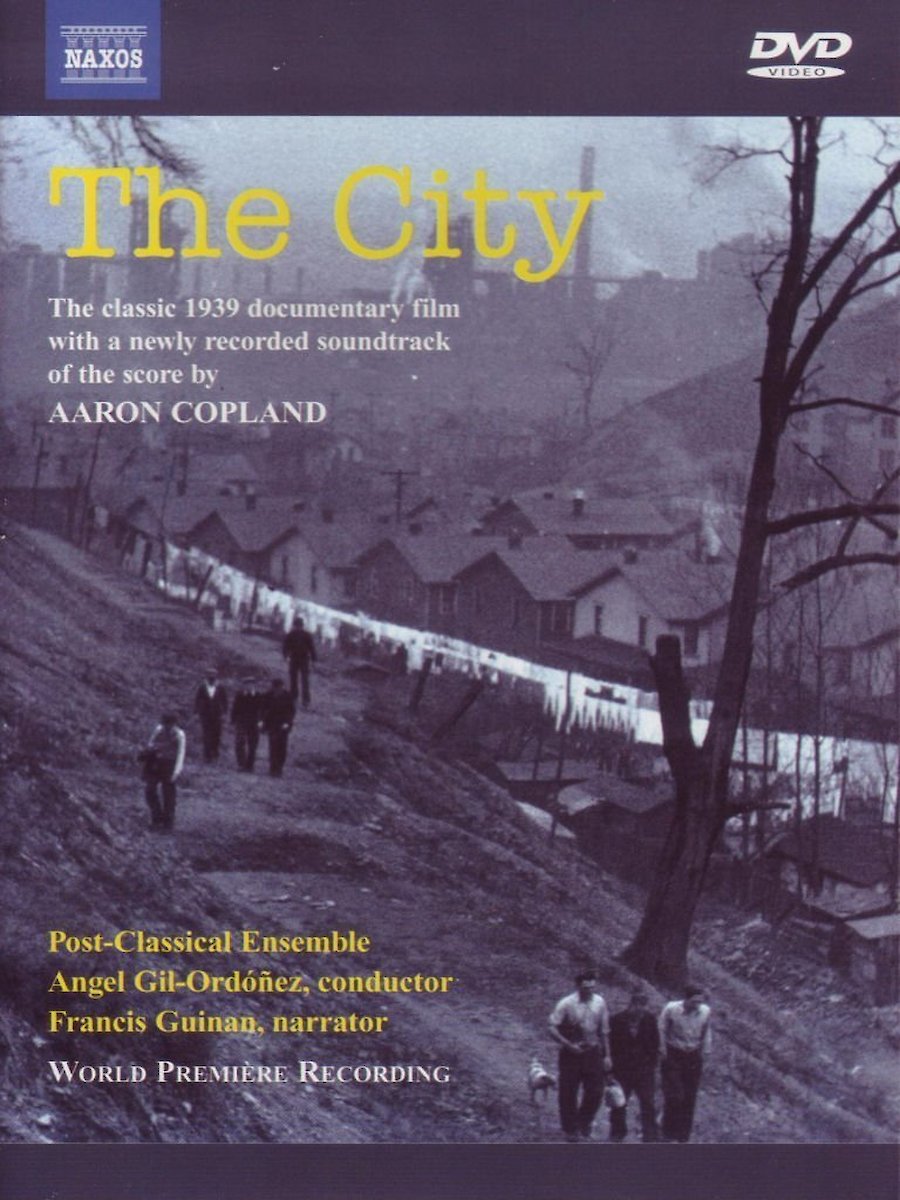 The crisp new recording sounds great (…) it’s a worthwhile recording that deserves watching more than once.

The newly recorded soundtrack is largely excellent, with the PostClassical En­semble exemplifying the understated, light, and precise style of playing needed for Copland’s music.

A fascinating disc, and highly recommended.

Released in January 2009 on Naxos with PostClassical Ensemble

The classic 1939 documentary film with a newly recorded soundtrack. Made for the 1939 New York World’s Fair (The World of Tomorrow), The City is a seminal documentary film distinguished for the organic integration of narration (scripted by city planner Lewis Mumford), cinematography (Ralph Steiner and Willard Van Dyke), and music (Aaron Copland).

PostClassical – Copland and the Cold War

This two-part podcast about Copland and the Cold War is part of PostClassical, a bi-monthly program that features performances by PCE’s music director Angel Gil-Ordóñez and artistic director Joseph Horowitz. Each program is thematic and reshapes the classical music experience through music and discussion. Bill McGlaughlin, host of Exploring Music, co-hosts with Horowitz and Gil-Ordóñez. These programs are recorded at Digital Island Studios in New York City and produced at the studios of WWFM – The Classical Network.

The newly recorded soundtrack is largely excellent, with the PostClassical En­semble exemplifying the understated, light, and precise style of playing needed for Copland’s music. The striking saxophone solos are particularly evocative and compare very favorably to their counterparts on the original recording. (Such comparisons are easily made, since the DVD also includes the entire film with the original soundtrack as a bonus feature.)

The reissue of these documentaries, accompanied by a superb restoration of the black and white image, is accompanied by a new recording of texts and scores (also available on two separate CDs). Nostalgics can watch the original version of the films and their soundtrack. Exciting discussions complete this work and remind us of the time of hope and social progress that were the Roosevelt years.

Aaron Copland's score for The City

This disc neatly captures a central dichotomy of the career of composer Aaron Copland. Raised in New York City, Copland gained his greatest successes with scores that extol a rural, bucolic vision of American life. Appalachian Spring, Rodeo, Billy the Kid — compositions that present an idealized, perhaps even sentimentalized portrayal of a boisterous, green America, while containing enough musical sophistication and imagination to remain perpetually fresh. One of the composer’s early forays into film composition came when he was asked to score a 45 minute documentary called The City, which is in effect an advertisement for Lewis Mumford’s planned community, Greenbelt. Before the filmmakers (Ralph Steiner and Willard Van Dyke) turn their film over to a rapturous hymn to Greenbelt, they set the stage by contrasting the virtues of country living with the veritable hell of city life, circa 1939 — the very city life that produced Aaron Copland.

Copland’s score features contrasting musical styles to support the on-screen images and rhetoric. Idyllic rural and suburban life is represented by pastoral, consonant music, while urban conditions are shown to dissonant, rhythmically jarring portions of the score. Additionally, there is often a strong physical correlation between specific images and musical figures, such as the clarinet triplet passage that plays while the viewer is shown a water wheel. The new recording of the score surpasses the original in many respects. There is greater dynamic range, more detail of orchestral color, and in general, the score works better as abstract music in the hands of the PostClassical Ensemble.

Published in September 2009 by Santiago Martín Bermúdez (Sherzo) in Spanish

This DVD allows us to see that same film, but now with a soundtrack that sounds like one would expect in a modern production, with the quality that corresponds to those images, of disturbing beauty –evocative images of a world that no longer exists, although in reality it was not quite so. Ángel Gil-Ordóñez and the PostClassical Ensemble give artistic and sonorous quality to this little-known score of Copland the the cinematographer, a wide-ranging score, an authentic masterpiece of the specialty, which is better to hear with the images for which it was composed.

Classical Releases: 'The City,' Mahler and Beethoven With Washington Roots

Published in July 2009 by Anne Midgette (The Washington Post)

Following their remastering of Pare Lorentz’s earlier The Plow That Broke the Plains and The River, with music by Virgil Thomson –films that influenced The City considerably– the PostClassical Ensemble has given this Copland score its first modern recording (conducted by Angel Gil-Ordóñez) and issued it on a bountiful DVD that includes a version of the film with the original soundtrack, a discussion between Joseph Horowitz and the filmmaker George Stoney, and a documentary about Greenbelt.

The score, arguably Copland’s highest achievement in film, was also his ticket to Hollywood; it has been called “an astonishing missing link not only in the genesis of Copland’s Americana style but in American music and cinema” (Mark Swed, The Los Angeles Times ). As the film contains no dialogue, it is possible to create a fresh soundtrack and discover musical riches inaudible on the original monaural recording. As Copland created no suite from The City, the present DVD at the same time marks the World Première recording of this music in its entirety.