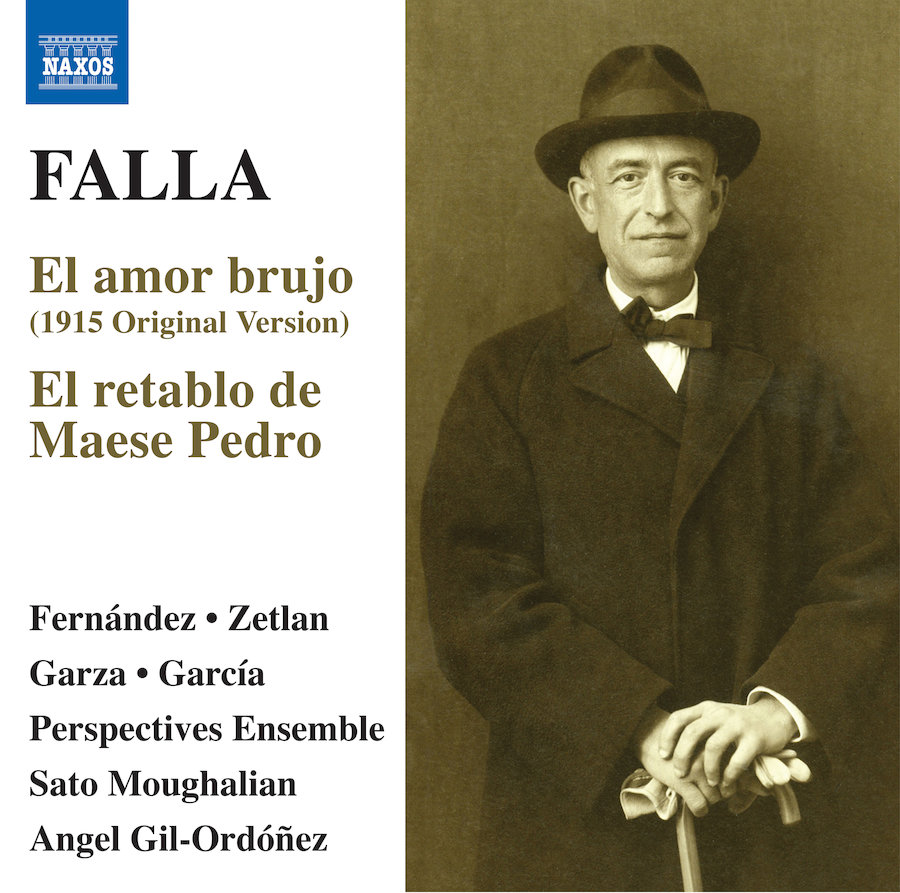 Angel Gil-Ordóñez seems to have stolen Eduard Toldrà’s baton, the tempos rush, the rhythms sharpen, the timbres fuse, making the work what it should be, a whirlwind, and leading in a skillful accelerando the tender or heroic episodes up to the carnage and the loving proclamation of the knight errant.

Released in May 2019 on Naxos with Perspectives Ensemble

Manuel de Falla is renowned as the greatest Spanish composer of the early 20th century, melding diverse stylistic, folk or literary influences into distinctive new musical languages and forging masterworks that have become cultural emblems of his homeland. This synthesis can be found in the original 1915 version of El amor brujo, a heartfelt representation of a young Roma woman’s dramatic quest to free herself of the ghost of her lover. The mini-opera El retablo de Maese Pedro pays homage to Cervantes’ beloved Don Quixote using instrumentations and rhythms that conjure both Spain’s Golden Age and the vibrant energy of new European music in the 1920s.

Angel Gil-Ordóñez seems to have stolen Eduard Toldrà’s baton, the tempos rush, the rhythms sharpen, the timbres fuse, making the work what it should be, a whirlwind, and leading in a skillful accelerando the tender or heroic episodes up to the carnage and the loving proclamation of the knight errant.

Distinctive and Different Falla from Gil-Ordóñez

There have been a couple of recordings of El amor brujo in its original, two-act chamber version of 1915, but this one is as fine as any and just might be the best around. Conductor Angel Gil-Ordóñez chooses ideal tempos, the members of the Perspectives Ensemble play beautifully, and everyone seems genuinely involved in projecting Falla’s characterful instrumental parts with just the right combination of precision and warmth (…) Once again the performance is excellent from all concerned, and both pieces are very well recorded.

Published in June 2019 by (Catalunya Ràdio) in Catalan

Also out this week

Published in June 2019 by Andrew Clements (The Guardian)

Manuel de Falla’s El Amor Brujo is best known nowadays in the form of the one-act ballet pantomime, first performed in 1924. But it began in 1915 as a much less conventional dance piece, involving spoken narrations and a cantaora, a flamenco singer, with an ensemble of just 15 players. Though the Naxos recording from the Perspectives Ensemble under Angel Gil-Ordóñez claims to be of that 1915 version, it actually uses a much larger body of strings than the original. But with Esperanza Fernández as the cantaora, there’s no lack of bite and raw intensity, and paired with an equally pungent account of another of Falla’s utterly original music-theatre pieces, the chamber opera El Retablo de Maese Pedro, it’s a really desirable bargain.

On the one hand, it is slimmer, fresher and more colorful than the revised version, but on the other it is also more sensual. The wonderful flamenco singer Esperanza Fernandez also gives the music a lot of authenticity. Gil-Ordóñez conducts very lively and with great intensity. The small chamber opera El Retablo de Maese Pedro uses an episode from Cervantes’s Don Quixote and is characterized by a very unusual instrumentation. In this recording it gets exquisite colours and a thrilling rhythm. Jennifer Zetlan is outstanding in the role of the little Trujaman, and tenor Jorge Garza as Master Pedro and baritone Alfredo Garcia as Don Quixote are also convincing. The recorded sound is also excellent, so that this is a highly recommendable production.

Published in May 2019 by The Infodad Team (Infodad.com)

Although generally deemed the greatest Spanish composer of the first part of the 20th century, Manuel de Falla remains something of an acquired taste outside his homeland. Really first-rate performances of his music, such as those led by Angel Gil-Ordóñez on a new Naxos CD, help explain why.

This performance of El retablo goes straight to the top of my list of preferred versions, and I consider the El amor brujo to be very nearly the equal of Toscanini’s in performance quality and, of course, far superior in sound.